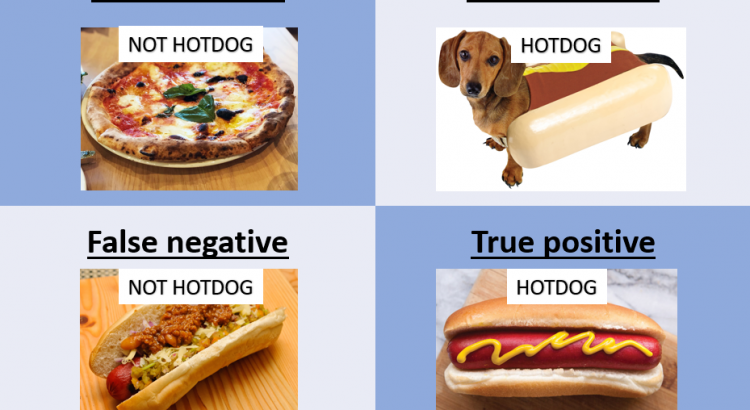 In this blog post, we’ll explore the confusion matrix, and calculate the following performance metrics:

What is a confusion matrix

Let’s take an example to make this more concrete: let’s say we were building a model that would predict whether a picture of food contains a hotdog, or not a hotdog. Image four cases:

In a confusion matrix, you typically want to see very high values in the diagonal (aka correct predictions), and low values in the other cells. There are a number of ways to express the relationship between the true/false positive/negative, which we’ll explore in the next section.

Metrics derived from the confusion matrix

As mentioned in the introduction, there are a number of metrics on how to measure the performance of a machine learning classifier. We’ll explore those here. For brevity, we’ll no longer spell out true/false positive/negative, but use the following notation:

Accuracy is a measure for how many correct predictions your model made for the complete test dataset. It is measured by the following formula:

Accuracy is a good basic metric to measure the performance of a model. The downside of simple accuracy, is that accuracy works well in balanced datasets. However, in unbalanced datasets, accuracy becomes a poorer metric.

If we take our hotdog-not-hotdog example, image if we would have 1000 total pictures, out of which 900 would be hotdogs. Even a poorly performing model that would classify each picture as hotdog would have an accuracy of 90%. That’s why we have other metrics for more detailed evaluation.

Recall – or the true positive rate – is the measure for how many true positives get predicted out of all the positives in the dataset. It is sometimes also called the sensitivity. The measure is collected by the following formula:

The recall value can often be tuned by tuning several parameters or hyperparameters of your machine learning model. By tuning those parameters, you could get either a higher recall or a lower recall. A higher/lower recall has a specific meaning for your model:

Recall is highly related to the next measure, precision:

Precision is a measure for the correctness of a positive prediction. In other words, it means that if a result is predicted as positive, how sure can you be this is actually positive. It is calculated using the following formula:

As with recall, precision can be tuned by tuning the parameters and hyperparameters of your model.

In the example we used for recall above (tumor-detection), the high recall means there is a low precision. This low precision isn’t an issue for that use case, since a medical doctor will still evaluate the results. You’d rather have a more false positives (aka lower precision) that miss a positive result that gets incorrectly predicted (aka false negative).

This measure is extremely important in medical testing, together with a related measure namely the false negative rate (calculated similarly to FPR). A false positive namely means that you are tested as being positive, while the actual result should have been negative. The inverse is true for the false negative rate: you get a negative result, while you actually were positive.

An f-score is a way to measure a model’s accuracy based on recall and precision. There’s a general case F-score, called the F1-score (which is most commonly used), by you could tweak an F-score by setting a value β.

The F1-score is the most commonly used F-score. It is a combination of precision and recall, namely their harmonic mean. You can calculate F1-score via the following formula:

The higher the F1 score, the more accurate your model is in doing predictions.

The formula for the general case of F-scores is:

You can deduce from this formula that the F1 score is a generalized case where β is 1, meaning precision and recall are balanced.

How to get these metrics in scikitlearn

Finally, let’s look into how we can get these metrics in scikitlearn. Scikitlearn has a metrics module, that contains formulas for all these metrics. For all formulas available, please refer to the documentation. In what follows, you’ll see a short code block that shows 4 of the metrics we discussed in this blog post (scikitlearn doesn’t have a FPR score method):

In this post we had a look at the confusion matrix, a common tool used to evaluate classification models. We also looked into 5 commonly used metrics to evaluate the performance of those models. We finished by having a quick look into how we can use these scores in scikitlearn.