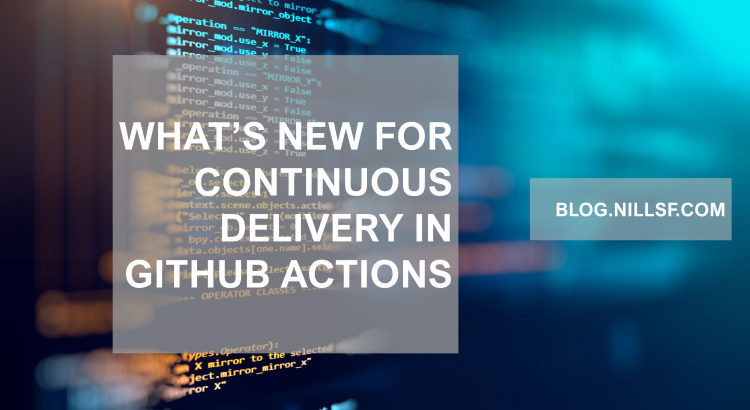 At GitHub Universe in early December 2020, some new functionalities for GitHub Actions focused on continuous delivery were introduced. In this blog post, we’ll explore them in the context of a simple web-app deployment to a Kubernetes cluster.

Before diving into what’s new, let’s have a look at what GitHub Actions are:

What are GitHub Actions?

Within an Action, you define a number of jobs. Each job has a number of steps, where each step is a command or set of commands that can be run. By default, jobs run in paralel, and A step can be as easy as running something on the command line, or it can be executing one of over 6000 Actions from the GitHub marketplace.

An example GitHub Actions that I used for an earlier blog post is contained here. Let’s cover the important steps in that action:

First, we cover the basics. We give the Action a name (in this case build_and_push), and we define when it is run. In this case, we run it on pushes and pull_requests against the main branch.

Next, we have the definition of the jobs. In this Action, I am only using a single job, but it could have been split up into different jobs. In this case, we’re defining that we’re running the Action on Ubuntu-latest. You could also run it on Windows or MacOS as GitHub hosted runners, or you could run the Actions on a self-hosted runner.

Finally, we get to the meat and potatoes of the Action: the actual steps. As you can see, most of the steps in my Action are commands I’m running on the Shell in the GitHub Action. I’m doing a number of steps involved in building the new image and then deploying it to Kubernetes. You can find the full definition of the Action on my GitHub repo.

Two things worth pointing out in the steps in the action:

Let’s have a look at what this means in a practical demo:

Demo of continuous delivery in GitHub Actions on a Kubernetes cluster

For our continuous delivery demo, we will build a very light website showing the version of our software. We’ll deploy this on a Kubernetes cluster, where a single ingress will distribute the traffic between test and prod. All of this is hosted on GitHub. This is what the architecture looks like (don’t worry, it’s less complicated than it looks):

To focus on the purpose of this blog post, I went ahead and did the following things already:

Let’s pick things up here by creating the deployment step for the test namespace. First, we’ll create an environment so I can enforce manual approval:

In the GIF above you’ll see the steps we took to create the environment. Let’s now also create a job in our GitHub action to use this environment and its manual approval step.

I committed this to the GitHub repo on the main branch to trigger the GitHub Action. To show the update, I also updated the index.html file to reflect version 2 is live.

Committing this to the main branch has indeed triggered the action, and after a couple seconds for the build step the finish, it also triggered the manual approval:

If we hit the review deployments button, we can approve and deploy.

And if you check in when the deployment is complete, you can track who approved to release to happen:

And the release did actually update the deployment on the Kubernetes cluster:

We can do the same thing for prod. The action for prod looks very similar to the one from test – with the only difference being we’re deploying to prod rather than to test.

Before committing this to git, let’s also create the second environment:

After creating the prod environment, we can then go ahead and commit our updated action with a HTML update so we can verify the deployment. The first thing that happens, is that we’re asked to confirm the test deployment:

We can approve this similarly to how we did that previously. What I didn’t realize previously is how there’s a neat little progress bar to track deployment status.

Then we wait for the test deployment to finish, and we are asked to review the production deployment:

And after approving the deployment to prod, we can afterwards see the full deployment review and see who approved each release.

And if we check both web pages, both are running on v3 now.

And that’s how you can use the deployment review feature in GitHub Actions.