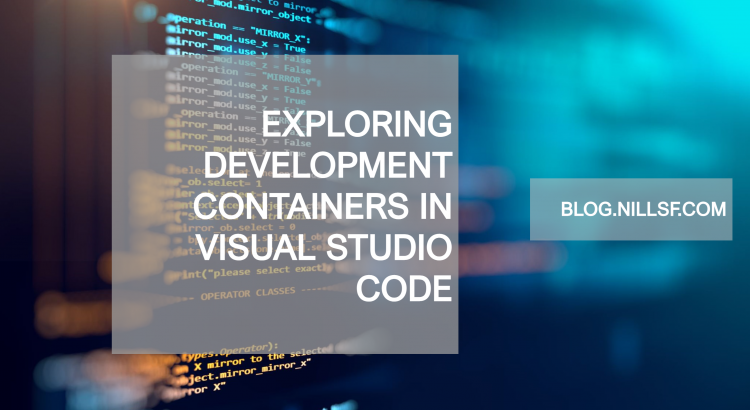 As part of my job, I work with multiple languages and multiple tools on a daily basis. Keeping environments up to date and having all the right tools installed can sometimes become a bit of a burden.

In order to get devcontainers in VScode to work, you need to install a couple of things:

To install the first two, I used chocolatey. The following two commands install chocolatey and install Docker Desktop and VS Code.

Now a reboot is required. After this reboot, to optimize Docker performance, installing WSL 2 is recommended. For more info on how to do this, please refer to this post.

Once WSL is setup, you also need to install the VS Code remote containers extension. To do this, open VS Code, click on the extensions icon, look for “container” and click on the install button.

And you now have the ability to open any folder in a container. Let’s start with opening an existing repo with a .devcontainer folder:

Opening an existing repo with a devcontainer definition

If you didn’t get this notification, you can also get here by opening the command pallet in VS code (CTRL + SHIFT + P) and looking for the action “Remote-Containers: Reopen in Container…”

And once you reopen an existing repo in the container, all tools are installed for you. In the case of the Bellhop container definition, this includes Az PowerShell and Pester, as well as the PowerShell extension for VS Code. As you can see below, this leads to intellisense being available and a Powershell terminal automatically opening as well:

The Bellhop repo contains a devcontainer definition already. But what if you don’t have one ready? I’ll cover that in the next section.

To create a new devcontainer definition you can use one of two options:

I prefer option (2) as it comes with some prebuilt containers. Let’s explore it here and let’s try to make a container with Python and the ability to edit Jupyter notebooks.

Next, open the VS code command palette by clicking CTRL+SHIFT+P. In this palette look for the “Add Development Container Configuration Files” option.

Next, you’ll want to scroll down and select the “Show All Definitions” option:

In that view, you’ll see a big list of predefined devcontainers. Look for the one called “Anaconda” and select that.

This will open the devcontainer.json. You don’t need to make changes to this, you can now build the container. To do this, open the command palette again (CTRL+SHIFT+P) and select the “rebuild and reopen in container” option:

This will build the devcontainer, which will take a couple of minutes.

Once the container is built, we can try if Python and Jupyter work well. To do so, let’s create a new notebook called “test.ipynb” (make sure to match the file extension):

The moment you open this file, you’ll notice that VS Code automatically launches it in a Jupyter notebook editor:

And you can work with this as any other notebook. Try for instance to make a small Python loop:

Which you can execute by pressing CTRL+ENTER or use the play icon in the top bar. As you will see, this executes in Python flawlessly:

And now that you have a working devcontainer, you can make changes to either the Dockerfile or the devcontainer.json to customize your environment.

In this post I showed you how to create and use VS Code devcontainers. They are amazing! You can work with any tool, any language without having to install anything locally (OK, you need VS Code and Docker). Once you launch a container, you have all the tools, VS Code extensions, intellisense available as if it were installed on your local machine.