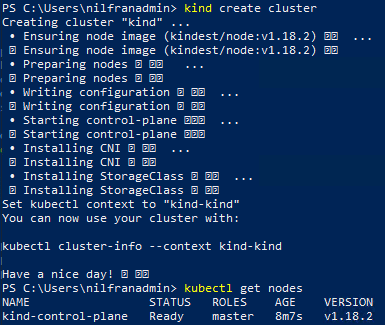 The default Docker Desktop installation will use Hyper-V to run Linux containers. Hyper-V is only included in Windows 10 Pro, not in Windows 10 Home.

To automate most of this, and to make installation easier, I’ll use the chocolatey package manager to do most of the work. To install chocolatey, you can run the following command in an Admin PowerShell window:

Once chocolatey is installed, it’s recommended to close the current window and open a new Admin PowerShell window, or use the refreshenv command. In this new window, we can now install docker-desktop and go

You now need to reboot your system. Either do this through the start menu, or using the following command:

Installing and using kind on Windows

Once your system has been rebooted, you can go ahead and install kind. Again, I’ll use chocolatey to install kind.

This will install kind on your system. With that, either open a new window or run refreshenv. With that done, you can create a kind cluster using:

Which will create the cluster for you:

And as you can see, we now have a single-node kind cluster.

With that out of the way, you can now also onboard this kind cluster to Azure Arc, which I explained here.

In this post, we explored how you can setup kind on Windows. Using chocolatey made the end-to-end installation pretty easy, the only downside being the need to the reboot.